The kind of maps that work else where like in US don’t work on Indian roads. For starters, roads are not clearly and visibly marked that one can look at while driving. So, the best form of navigating on Indian roads is by “asking somebody” for directions and then by following those directions based on landmarks, that can’t be missed.

We also discovered that there are three situations in which people resort to landmarks.

Digitizing this “landmark” based navigation so that it can be used on maps like Google maps is a herculean task, if not impossible. But Google appears to have done it, with the help of community of Indian online users.

This effort was possible thanks to the large amount of landmark data that users like you contributed through Google Map Maker. Our new algorithm determines from available signals, which of these landmarks are most useful for navigation, based on importance and closeness to the turns that you're making. We now combine landmark data, counted turns ("the 2nd right"), intersection names, and road names, and try to use whatever information is most relevant and useful for the direction you're heading in.

With extensive user input, some wonderful algorithms and great user interface design, now Google Maps offers navigation just the way we, Indians, always do, based on landmarks. Look at the sample screenshot. Its amazing. 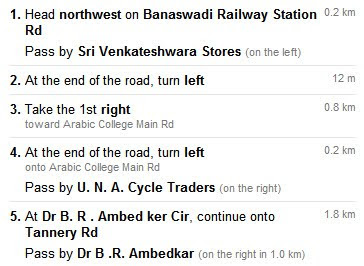 Great job, Google team. And a ton of thanks to all those who contributed inputs on landmarks to Google.

Please visit http://RouteGuru.com for a technology demonstration (live for Delhi-India).

We use Google Maps API to (and only to) display our route on a graphical map. It can also be proved that our technology is better than Google’s.

Google has just stolen the concept and formulated a great story to covey their mettle without giving any credits to us.

murali said…
I have no doubt, Route Guru offered this kind of service first on the internet. But what I find amazing in Google's initiative is the use of local community to provide the landmark database and then use that data to provide land-mark based directions on the pervasive Google maps.

Avinash said…
Landmark collection is an independent process than identifying the existing landmarks in the Database for a meaningful direction output. Whether the landmark comes from user or from the base GIS dataset, is immaterial to the landmark generation process.

Lanrmark based directions concept is surely a 1000 year old concept but the first demonstration of it's technological simulation was indeed pioneered by RouteGuru which is independent of the medium it is accessed through (Web/Mobile).
January 7, 2010 at 1:03 AM

murali said…
If we remove the collection of data from the equation, then meaningful interpretation of GIS dataset is what all web/mobile based navigation is doing. Landmarks are just another attribute to the GIS data that are being used to either compliment or replace the normal mode of routes/directions.

For instance, street views provided by Google Maps is such an extension attribute to traditional GIS data where it compliments the whole information throughout the route. The underpinning algorithms to find the route do not change, just the visual cues. Just like a Google maps based mash-up with a different type of visualization in-terms of landmarks.

I definitely heard it from Route Guru first time, this kind of landmark based visual cues. And that credit goes to Route Guru, no doubt.
January 7, 2010 at 1:32 AM