Showing posts from February, 2014
Show all

This is yet another example of NDTV.com’s sensationalism twisted titles. The title says, as if this was a fact, woman made to urinate in public. In fact, this was just an allegation by a lawyer. If NDTV.com to demonstrate any integrity, should have included the word ‘alleged’ or ‘charged’ or similar words to indicate that this wasn’t a fact, but an allegation by a lawyer. That would have changed the entire tone of the article. The problem is that everywhere the page is referred on social networks and elsewhere, it is the title that will be quoted and repeated. Not many people may even read the whole story.  Being very active on social networks, NDTV know that quite well. So NDTV.com scored a perfect sensational story, with its choice of words in the title. Source: NDTV.com At that time, there was nothing confirming that it actually happened. No video footage or any of those women directly made that allegation on videos.
Post a Comment
Read more 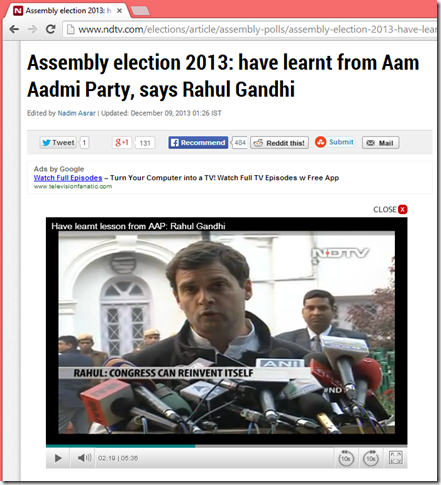 This was the first time, I got confused and started questioning NDTV.com’s sensationalism agenda behind twisting titles of their news stories. This was on the day Delhi Assembly election results were announced. The NDTV.com story title said : “Assembly election 2013: have learnt from Aam Aadmi Party, says Rahul Gandhi”.   However, content later in the article says it differently : "The Aam Aadmi Party involved a lot of non-traditional people and we will learn from that ...and will better it in a way you cannot imagine," Mr Gandhi said I have watched the video multiple times, just to make sure I wasn’t missing anything. Here is the actual choice of words Rahul Gandhi used. [04:07] “I think, I think the Aam Admi Party has involved a lot of people, who the traditional parties did not involve. We are going to learn from that and we are going to do a better job than anybody in the country and involve people in ways that you can not even imagine right now.”  Source : NDT
Post a Comment
Read more 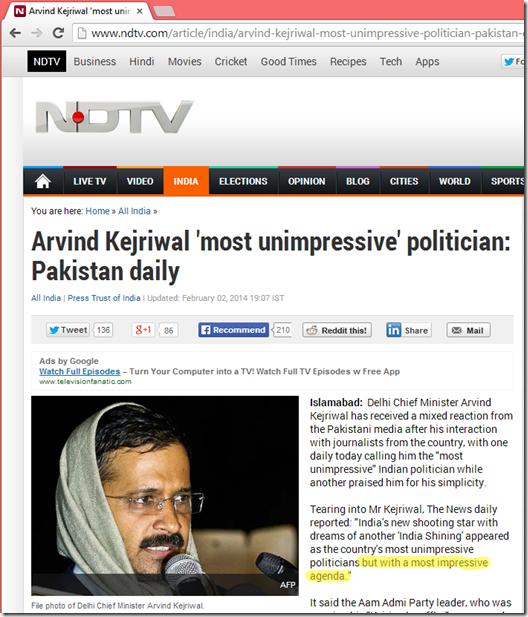 As I mentioned in an earlier post, I have recently spotted quite a few ‘sensationalism’ twists to news stories on NDTV.com.  This is yet another one, in this case, a misleading title, by deliberate omission of words that would have actually put the whole title in a positive tone for Arvind Kejriwal. The article quotes a news paper quoting, “The News daily reported: "India's new shooting star with dreams of another 'India Shining' appeared as the country's most unimpressive politicians but with a most impressive agenda. " It conveniently ignored the second part of the sentence, “most impressive agenda” which would have given a completely different kind of meaning and context to the whole sentence and would have put the same politician on a positive note.  Again, it sure look to me like deliberate sensationalism twist, this case also a biased view rather than anything. Isn’t it? Source: NDTV.com
Post a Comment
Read more 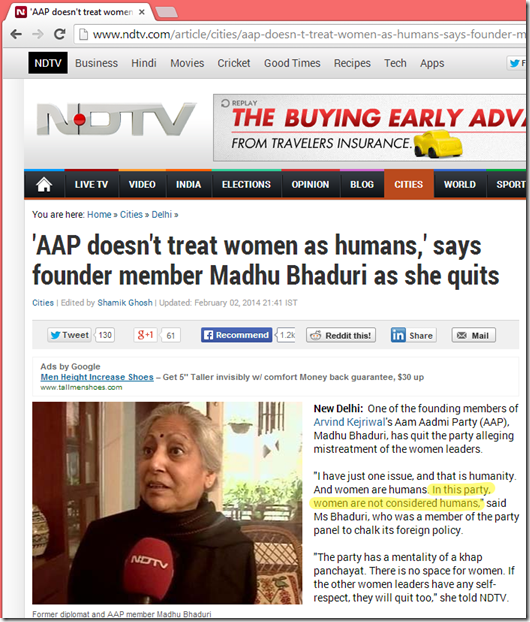 I have recently spotted quite a few places where NDTV title doesn’t exactly say the same as the details in the article says. Lost in translation? or just plain twisting for journalistic sensationalism? Title says “' AAP doesn't treat women as humans ,' says founder member Madhu Bhaduri as she quits”, but the quote in details says, slightly differently: “In this party, women are not considered humans” (see the text highlighted). Source : NDTV.com You may say, they effectually mean the same thing. Is it? Even if they mean the same,  Why not use the same exact phrase in both places?
Post a Comment
Read more
More posts