India blasted into the international space race Wednesday with the successful launch of an ambitious two-year mission to study the moon's landscape. 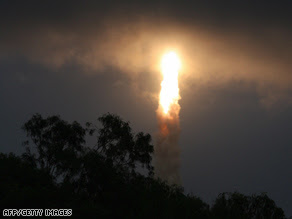 In its fourteenth flight conducted from Satish Dhawan Space Centre (SDSC) SHAR, Sriharikota this morning (October 22, 2008), the Indian Space Research Organisation’s (ISRO’s) Polar Satellite Launch Vehicle, PSLV-C11, successfully launched the 1380 kg Chandrayaan-1 spacecraft into a transfer orbit with a perigee (nearest point to Earth) of 255 km and an apogee (farthest point to Earth) of 22,860 km, inclined at an angle of 17.9 deg to the equator.

You may watch video highlights of the preparation and Launch here.