Chiranjeevi addressed one of the largest political meetings we have ever seen recently, where he revealed the party name, flag and a remixed theme song along with key issues the party is planning to address. We were really thrilled to hear the name of the party.

We have been guessing a name with similar theme. The name fits to the ambitions and promise of the party. Watch these videos on YouTube to get a glimpse of the first meet where Chiranjeevi announced the Party Name, Flag and core issues that he want to fight against. We will have detailed analysis later. 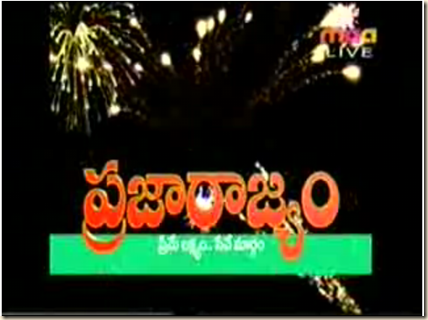 Earlier in the meeting, he spoke about the humble beginnings of his own life, we are pretty sure, no body has ever heard in that perspective so far. There is a clean mix of political ambitions and attempt to tell a story. But overall, people may have a better idea about his beginnings now. More on that later.