I always observed a huge contrast between the way Bill Gates and Steve Jobs present. While I enjoyed and watched Steve Job's presentation in full and many times more than once, I have never completed a Bill Gate's presentation so far. I had difficulty understanding Bill Gates. I found his thoughts to be too abstract and his speech very monotonous. Steve Jobs however speaks in a very engaging fashion and in very simple words and great visuals.

I found a blog post that compares the contrasting styles that Steve Jobs and Bill Gates uses in thier presentations, that might explain the reasons for my bias.

Gates and Jobs: lessons in contrasts
Take a look at some of the typical visuals used by Steve Jobs and those used by Bill Gates. As you look at them and compare them, try doing so while being mindful of the key concepts behind the traditional Zen aesthetic. 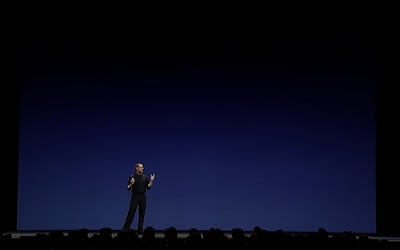 Above. Does it get more "Zen" than this? "Visual-Zen Master," Steve Jobs, allows the screen to fade completely empty at appropriate, short moments while he tells his story. In a great jazz performance much of the real power of the music comes from the spaces in between the notes. The silence gives more substance and meaning to the notes. A blank screen from time to time also makes images stronger when they do appear.

Also, it takes a confident person to design for the placement of empty slides. This is truly "going naked" visually. For most presenters a crowded slide is a crutch, or at least a security blanket. The thought of allowing the screen to become completely empty is scaring. Now all eyes are on you. 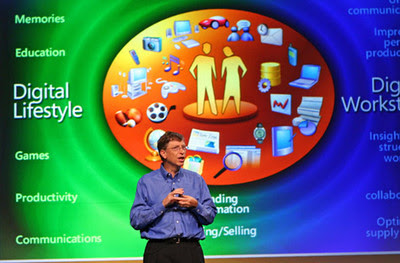 Above. Gates here explaining the Live strategy. A lot of images and a lot of text. Usually Mr. Gates' slides have titles rather than more effective short declarative statements (this slide has neither). Good graphic design guides the viewer and has a clear hierarchy or order so that she knows where to look first, second, and so on. What is the communication priority of this visual? It must be the circle of clip art, but that does not help me much. 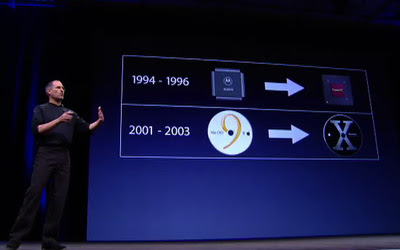 Above. Here Jobs is talking to developers at the WWDC'05 about the transition from the Power PC RISC chips to Intel. Sounds daunting, but as he said (and shows above) Apple has made daunting major shifts successfully before. (He also said sheepishly earlier in the the presentation, that every version of OSX secretly had an Intel version too...so this is not a new thing. The crowd laughed.).

A note on having an "open style"
One thing that would help Mr. Gates is an executive presentations coach and a video camera. One unfortunate habit he has is constantly bringing his finger tips together high across his chest while speaking. Often this leads to his hands being locked together somewhere across his chest. This gesture makes him seem uncomfortable and is a gesture reminiscent of The Simpsons' Mr. Burns. By contrast, Steve Jobs has a more open style and at least seems comfortable and natural with his gestures. 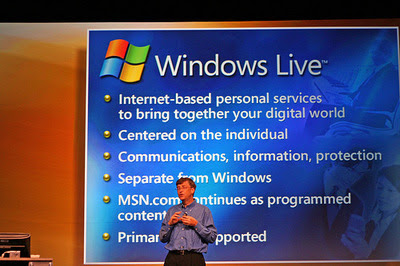 Above. Mr. Gates needs to read Cliff Atkinson's Beyond Bullet Points, ironically published by Microsoft Press. Atkinson says that "...bullet points create obstacles between presenters and audiences." He correctly claims that bullets tend to make our presentations formal and stiff, serve to "dumb down" our points, and lead to audiences being confused...and bored. Rather than running through points on a slide, Atkinson recommends presenters embrace the art of storytelling, and that visuals (slides) be used smoothly and simply to enhance the speaker's points as he tells his story. This can be done even in technical presentations, and it can certainly be done in high-tech business presentations.

The "Microsoft Method" of presentation?
The approach we've seen in Microsoft's last public presentation we can label the "Microsoft Method." This method is not different than the norm, in fact it is a perfect example of what Seth Godin and others call "Really Bad PowerPoint." Here's the rub: A great many professionals see the absurdity of this approach, even a great many professionals on the campus of Microsoft in Redmond. But change will continue to be slow, especially when the executives of the company which produces the most popular slideware program in the world use the program in the most uninspiring, albeit typical way.

Above. Chief technology Officer, Ray Ozzie follows the "Microsoft Method" too. (Left) Bullet No.3: "...interfaces through...interfaces"? (Right) Fundamental presentation rule: Do not stick your hands in your pockets. Informality is fine, but this is inappropriate even in the USA (and especially in cultures outside the U.S.).

satpalparmar said…
NIce post murali.I guess everyone can learn somthing about presentaion that are integral part of every professional specialy working in It industry.
June 21, 2007 at 7:50 PM