Amazon Kindle : Nice, but not for me

This is the picture of an Amazon Kindle, I enjoyed for a really very short time before returning it today. May be a remarkable gadget on its own and may have been the most popular product on Amazon, but I found in a short amount of time I held it in my hands that its not for me. 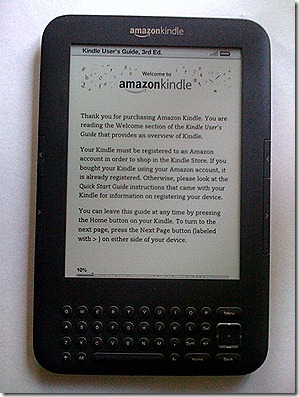 After spending a significant amount of time on my first generation iPad, Amazon Kindle felt like a feather, almost weight less. Give it to contrast theory.  But that was the only thing I really liked it. It is much smaller than it looks. Its Paper like screen, crisp font and little keyboard are nice but nothing impressive.

I normally don’t go to a beach or sit in the backyard and read books in broad day light. I wish I could. But with a toddler in the family, only time you get to skim through a book is once kids go to bed. So, ability to read in a broad day light isn’t a feature for me. Moreover, lack of backlit display was indeed a big drawback.

May be if you are reading colorless fiction, its black and white screen may be just fine.  But if you want to read any thing like a PDF report, I felt like watching a black and white movie from 1940s on a tube TV after watching a HD action movie on giant LED screen. Adding insult to injury, you have to pay to read a blog. Is it worth a trade for its convenience?

My vivid iPod touch is even lighter than the Kindle and Kindle App on it is lovely to skim through a book, or anything for that matter, if the weight of my iPad becomes such a big issue for reading books.

No, Thanks. Amazon for your Kindle. I love your impressive Kindle App though.