Would you like to carry an iPod, a Sony recorder, a Palm PDA, a cell phone, a digital camera, a gaming console, a GPS navigator, a jump drive, a laptop, â€¦â€¦â€¦â€¦â€¦.. OR a cool smart Cellular phone?

I strongly believe that Smartphone will rule the markets and also posted why it is so inexpensive to buy a multi tasking phone than buying individual gadgets that can do one thing better (Busting The myth of Smartphone Market). NewYorkTimes reports about some surprsing skills that new cellphones are equpped with this Christmas, indicating the trend towards Multitasking phones instead of plain old cell phones, that can just do one thing better. You don't need to own a smartphone or a blackberry to do multiple tasks. Almost all new phones are like smartphones that can do whatever you need. 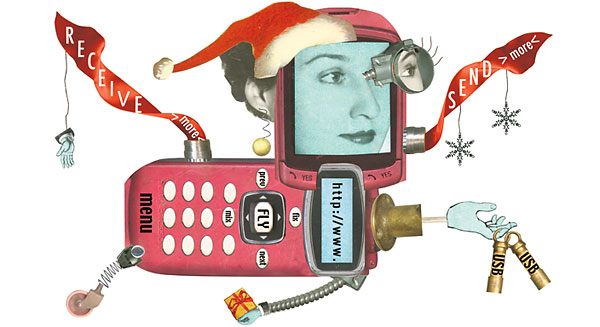 The illustration is what caught my eyes. I strongly believe that Smartphones or Multitak phones are going to rule the markets. Even I attempted to illustrate my belief of future phones in a simpler, not-so-eye-catching fashion. Also, explained why it is less expensive to buy a multi tasking phone than buying individual gadgets that can do one thing better (Busting The myth of Smartphone Market).